Suffragettes and the 1911 census

2018 marked 100 years since some women were given the vote in parliamentary elections and 90 years since women got to vote on equal terms to men.

The campaign for universal suffrage was a long and hard fought one. In addition to highly visible acts of civil disobedience, such as window smashing and setting fire to post-boxes, many women also carried out quieter forms of civil protest.

In 1911, the Women’s Freedom League launched a campaign to encourage women to refuse to complete that year's census. In April that year a meeting was held in Trafalgar Square instructing women not to participate. The protesters followed the slogan: “I don’t count so I won’t be counted”.

Here are a selection of 1911 census returns that show how some women chose to stand up for their beliefs in an official document.

Beatrice Le Mesurier gave her occupation as "Suffragette" but wrote "No vote. No census" across the form. The enumerator noted (in red ink) that the address was "Open house to suffragettes" and established that 10 women were resident, with 8 designated "female" presumably because all refused to give their names. 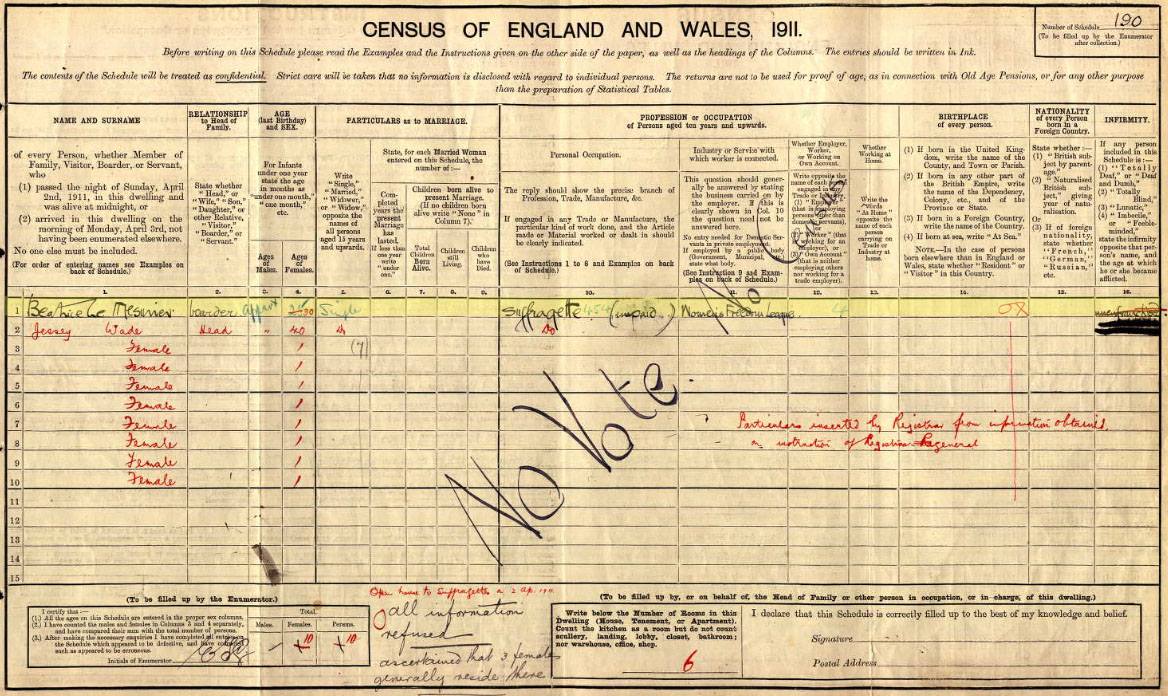 Louisa Burnham also wrote "No vote. No census" on the form but went onto note "If I am intelligent enough to fill in this census form I can surely make a X on a Ballot Paper." 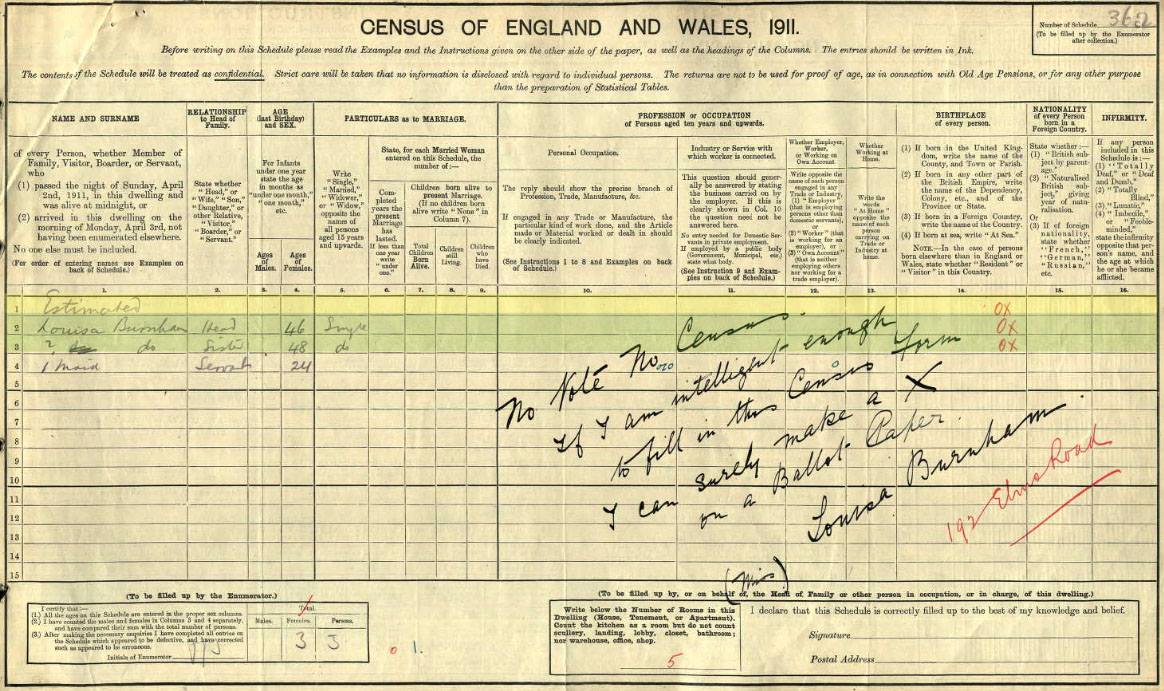 Eleanora Maund, the wife of Edward Arthur Maund, a Company Director, crossed out her name and wrote "Wife away" on the form. Edward, clearly unimpressed by Eleanora's action, added his own note "My wife unfortunately being a suffragette put her pen through her name, but it must stand as correct. She .... has only attempted by a silly subtafuge (sic) to defeat the object of the census to which I as "Head" of the family object." 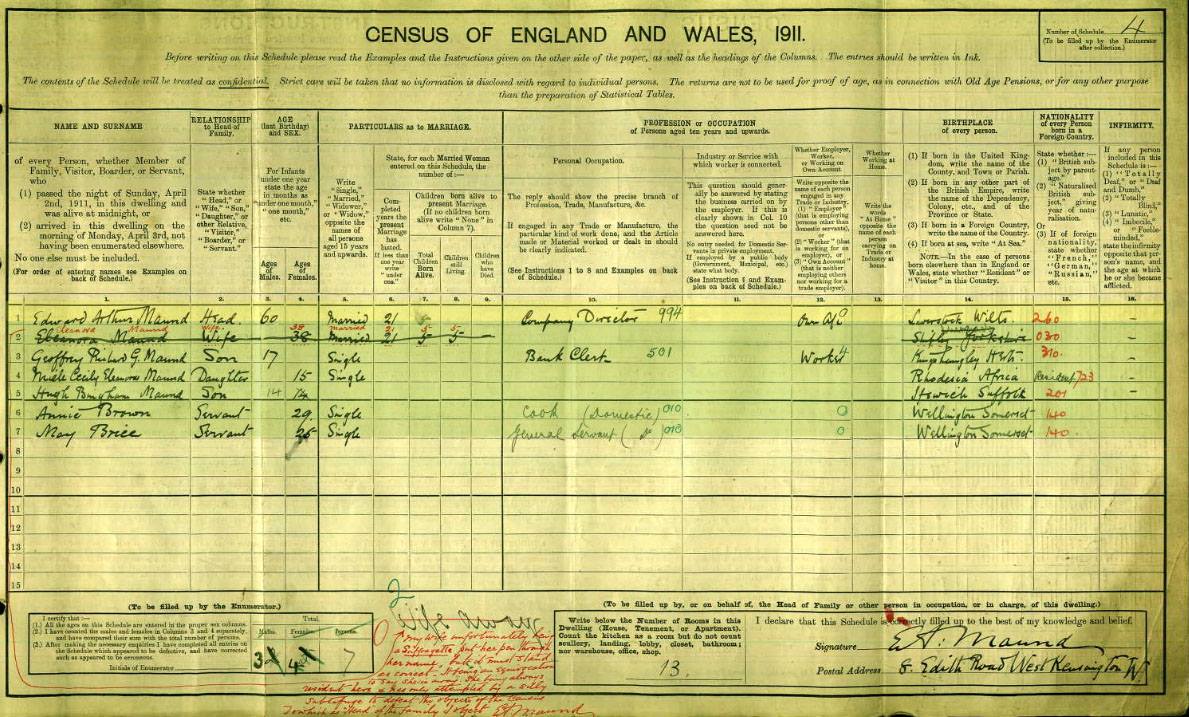 Emily Wilding Davison is perhaps best remembered as the suffragette who died in 1913 after throwing herself in front of the King's horse at the Epsom derby. On census night 1911 Emily hid in a cupboard in the Chapel of St Mary Undercroft in the House of Commons. The census form recording Emily's presence was signed by P. E. Ridge, Clerk of Works Houses of Parliament (who mis-spelt her name as 'Davidson'). The accompanying schedule gives the postal address as 'Found hiding in crypt of Westminster Hall.' The pencil note on the form gives the date "3/4/11 Since Saturday". 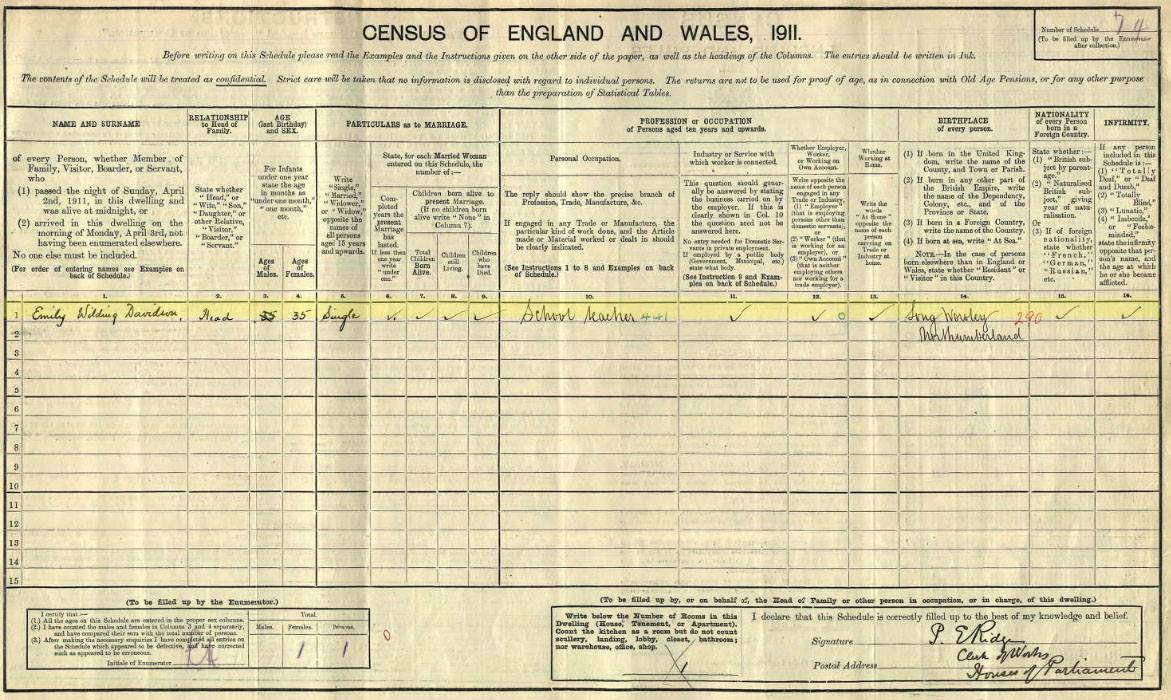 Katherine S. Dreier returned the uncompleted census form noted "No vote, no census. I have joined the brave women of England in their dignified protest against the systematic blocking by the Government of the "Women's Conciliation"." 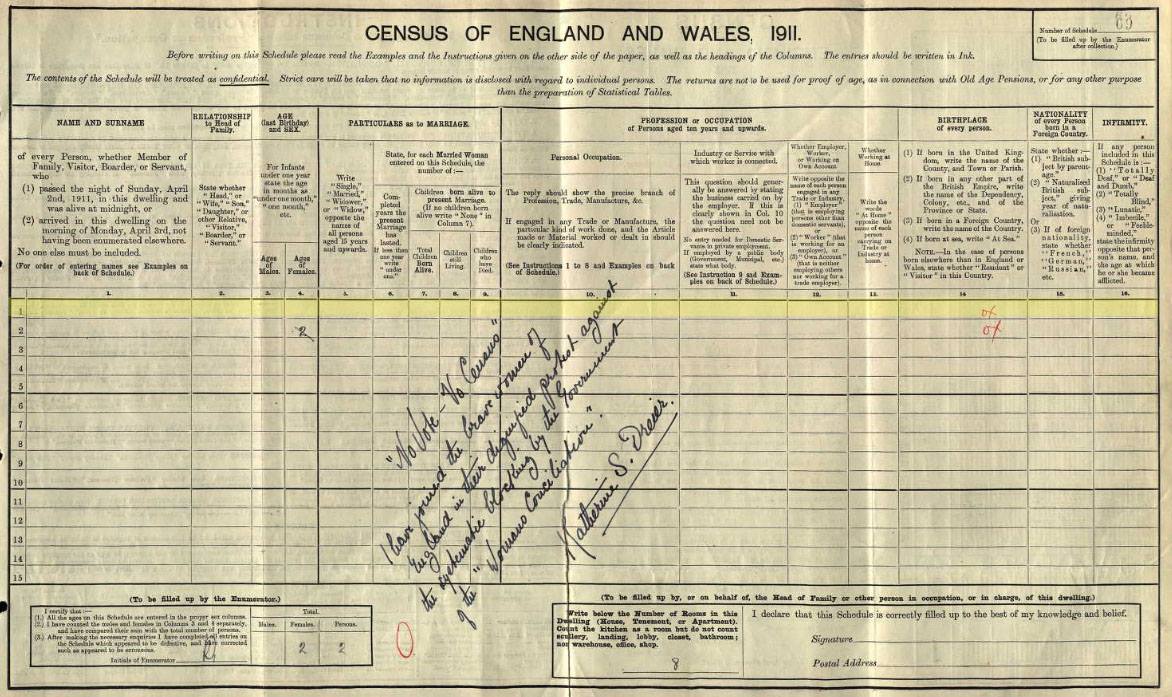 Mary Howey, who declared herself an "artist & suffragette" simply wrote "VOTES FOR WOMEN" in big capitals on her census form. In the last column on the form, designed to record any infirmities, she wrote "not enfranchised" but this entry was scribbled out in red pen by the enumerator. 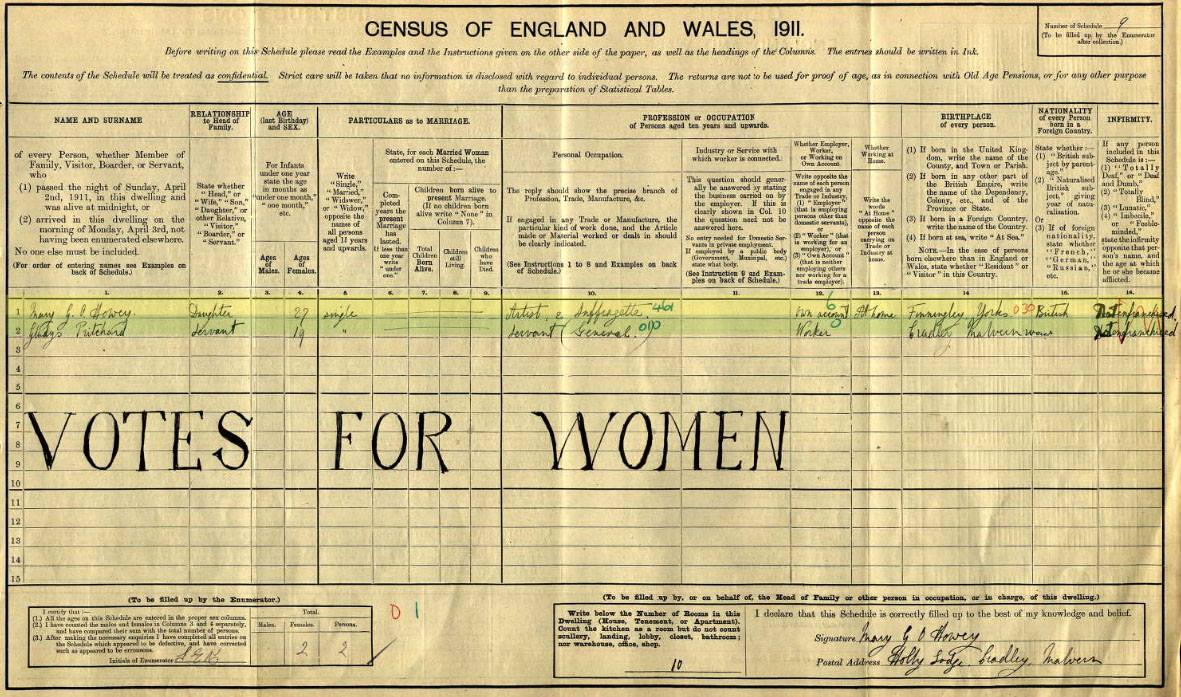 Were any of your ancestors involved in the Suffragette movement? We can help you find out.

Commission research to your specification and pay by the hour. No project is too small.

We use cookies on our website. Some of them are essential for the operation of the site, while others help us to improve this site and the user experience (tracking cookies). You can decide for yourself whether you want to allow cookies or not. Please note that if you reject them, you may not be able to use all the functionalities of the site.